The 18th “Shklyar Cup” – a tournament that regularly takes place in early winter – was held in Dnipro on December 7-9. This year it changed its location.

If earlier the tournament was held in the Palace of Sports “Meteor”, and in recent years in the “Menor”, this time the competition was hosted by KSC “Shinnik”.

However, it was not the only novelty of the tournament. For the first time the program of “Shklyar Cup” included senior categories under the patronage of WDSF – both Standard and Latin categories. Dancers, who are not members of the organization, could participate in the open category. So the senior had a place to dance.

Due to the change of venue, “Cup Shklyar-2019” somewhat lost in atmosphere, but the heat of passion, the quality of the parquet and music were at an exceptional level.

Seven couples from two countries took part in this category. Foreign guests of the tournament were dancers from Austria – Eckhard Grosz and Gabriela Grosz. The pair is quite experienced.

Interestingly enough, this is not the first visit to Ukraine for them. In March 2019, they took part in competitions in Kiev. And there they have already met other participants of the “Shklyar Cup” – Lviv couples Vasyl Porokhovsky – Olha Baltrunas, Andriy Kokodynak – Oksana Khomyak and Serhiy Shaf – Olha Shaf from the Dnipro. 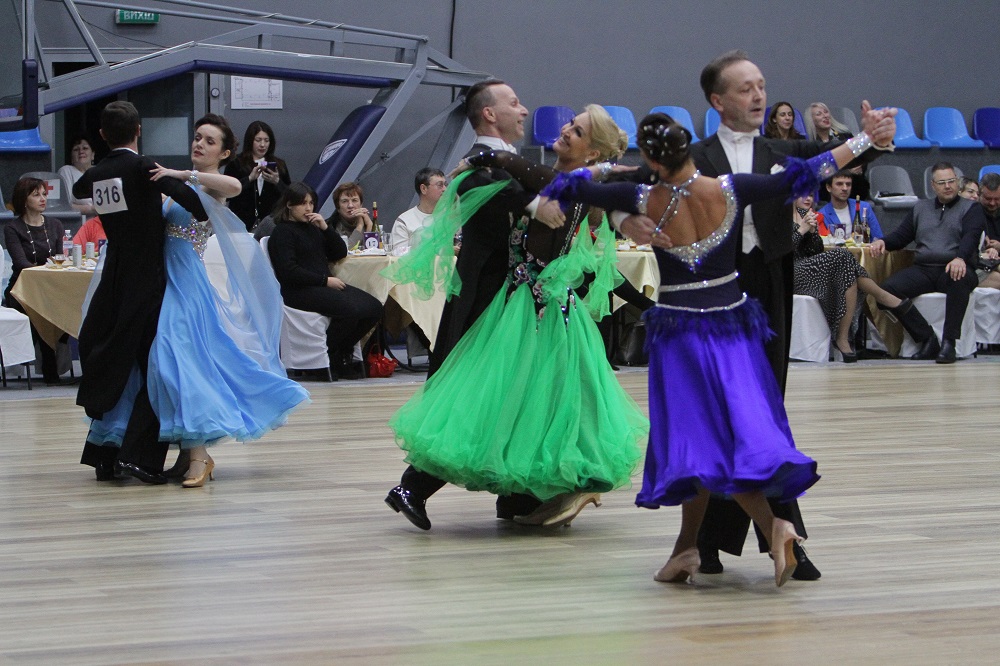 During 2019 the Austrians took part in seven more tournaments, and all of them were held over the ocean – in the United States and Canada. Six times they became the winners. But at the “Shklyar Cup” they took the fourth place.

The favourites took the first three places. A pair from Lviv, Vasyl Porokhovskyi and Olha Baltrunas, who got the gold medal, are now out of competition in Ukraine among the Senior 1 St, and are among the best pairs in the world. According to the results of 2019, they took the 21-nd place in the world ranking. In Dnipro, they have confirmed their high skills.

Second place was taken by the dancers from Dnipro – Serhiy and Olha Shaf. This is the pair, in which not two, but four hearts are beating at once. Traditionally, at the “Shklyar Cup” they dance not only in senior categories, but also compete against young people. Energy, physical fitness and skills are enough to dance with the maximum concentration each time they go on a parquet floor.

And it’s not just during the “Sklyar Cup”. In 2019 Sergey and Olga fought on equal terms in the final with the favourites in Slovak Kosice, successfully performed at the WDSF tournament in Vienna. All this despite the fact that they perform not only in “standard” but also in “Latin”.

Andrey Kokodinak and Oksana Khomyak from Lviv took the third prize-winning place. This pair is light, dynamic and competitive. The year 2019 was the most productive for them in terms of international experience. Vienna, Kosice, Dresden – trips to these tournaments were a good test of strength for Andriy and Oksana, and they endured it. Firm and confident bronze medal in Dnipro was an extra proof for that. 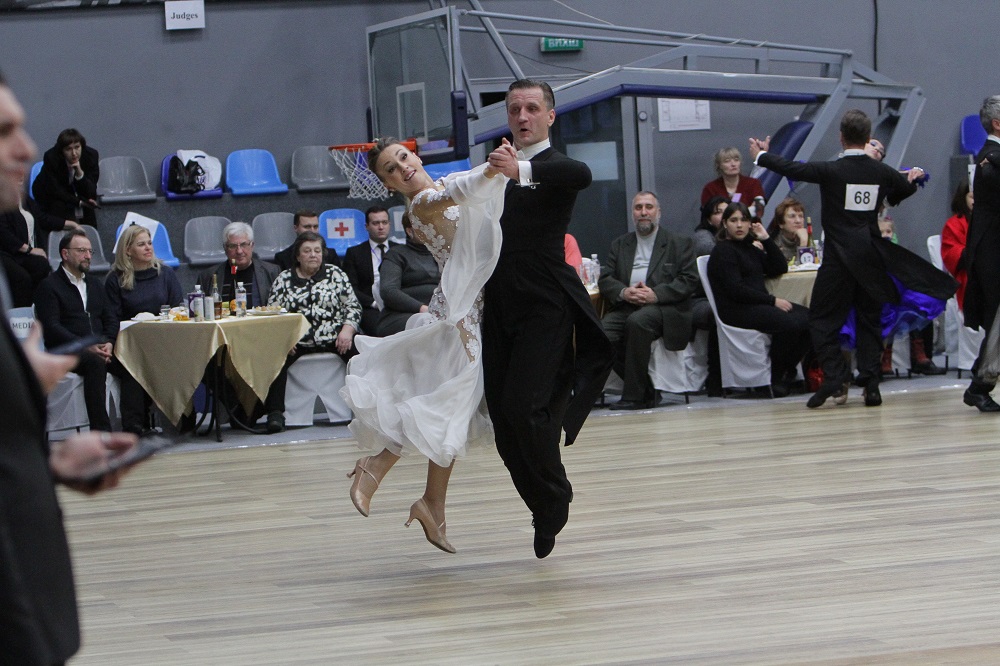 It is also worth noting a couple of Dmitry Teslenko – Tatiana Brostovich from Dnipro, who took the fifth place in the tournament. For them it was the first time in history to go to the tournament under the patronage of WDSF, and they succeeded.

I think this tournament was more of a stage for them, where they got enough food for thought for their further achievements.

Next are the two married couples from Dnipro: Oleh and Isabella Rodkin, as well as Oleh and Olena Tykholyz.

In this category compared to the “standard” the situation was different – it was foreign guests who were beyond competition. This time a status pair from Italy visited Dnipro – Emanuele Appetito – Debora Proietti Pesci.

At that point, they were on the 10th place in the world ranking. In 2019 they won tournaments in Italian Pescara and Bertrand (Luxembourg), and at the most prestigious WDSF tournament in Stuttgart they took the 9th place.

Their arrival at the “Shklyar Cup” was a further confirmation of the prestige of the tournament. Their performance in “Shinnik” delighted the audience, as well as the performance of the Sergiy and Olga Shaf, who took the second place, as well as the couples from Kiev – Pavlo Orol and Olena Orol. 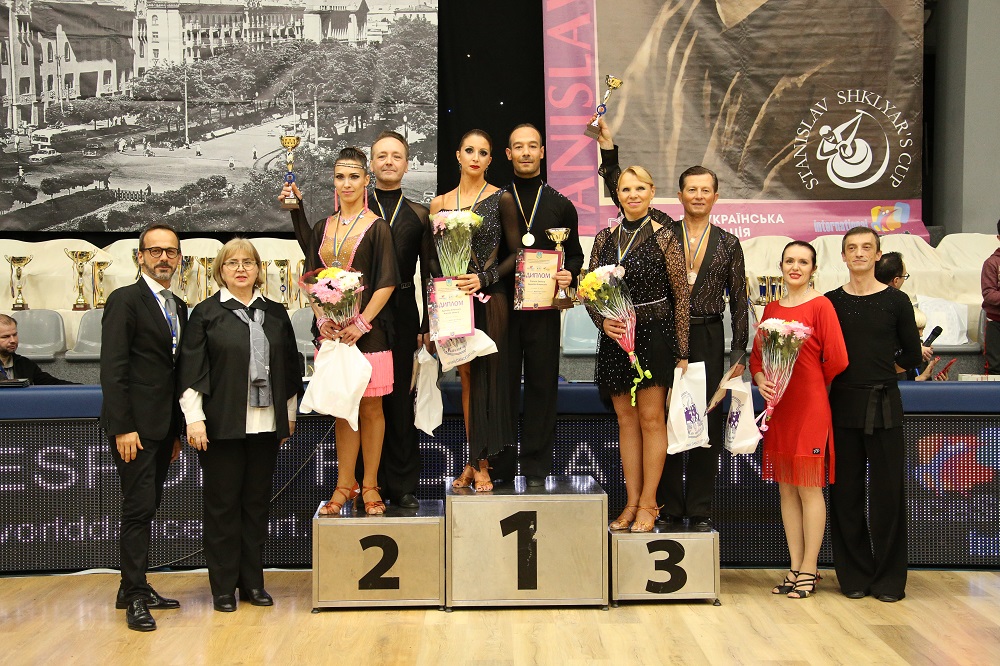 A couple from the capital of Ukraine is especially worth mentioning, as their “native” category is senior 3, but it’s hard to believe their age, if you look at their movements to the Latin American motives.

The fourth in this category were Oleh and Olena Tykholyz.

In this category nine pairs competed, representing five clubs from three cities of Ukraine – Dnipro, Zaporozhye and Cherkassy. There was a semi-final, which resulted in the final six best pairs.

A pair from a dancing school “Harmony” Sergiy Shaf – Olga Shaf took the victory. The second place belonged to a couple from Zaporizhzhya, Dmitriy Dramshev and Ekaterina Dramsheva. A pair from the Style club made their Latin American debut at this tournament last year, and this year they made their standard debut as well. And immediately – a place on a pedestal. Note, that Mitya and Katya have been participating in the tournaments for only a few years and have become a worthy addition to the senior family.

Vladimir Yurtayev and Marina Yurtaeva took the third place. It’s another married couple that claims prizes at each tournament. The couple representing the Ezhova School is quite charismatic, never changes their style, but knows how to be unpredictable. It’s got a lot of passion and emotions. 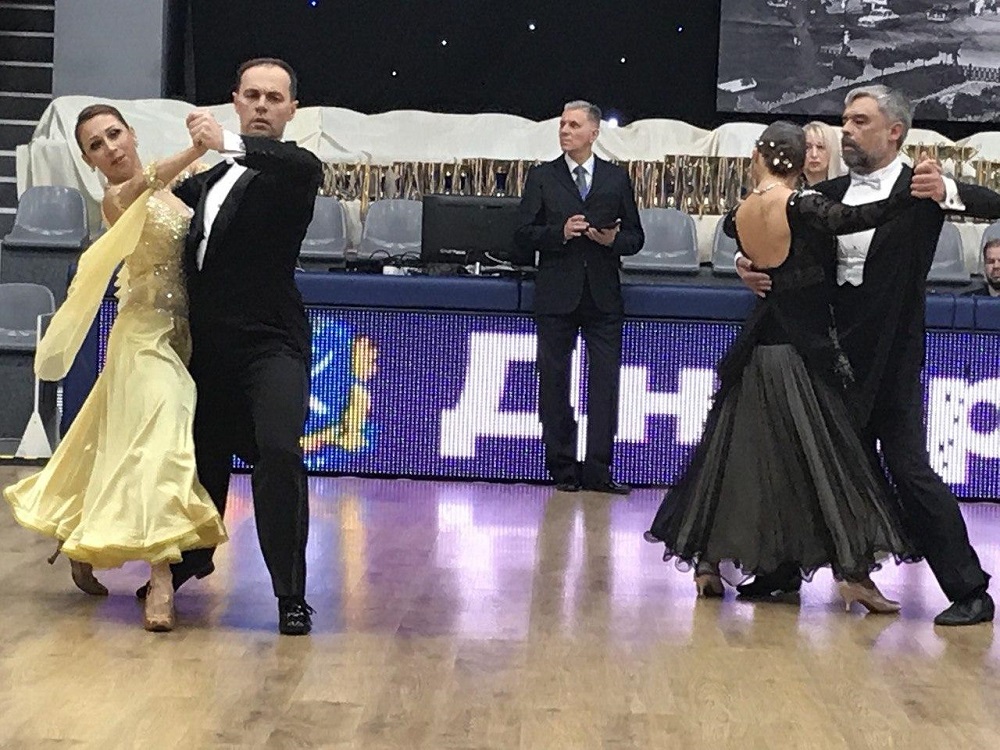 Special attention at this tournament was drawn to another couple from Zaporizhzhya – Peter Beletskyy and Lyudmila Beletskaya. On the day of the tournament they celebrated the 40th anniversary of their lives together, and the rest of the participants congratulated the jubilees right on the parquet floor.

The biggest in this category at the tournament was the representative office of the club “Focus” from the Dnipro, counting four pairs: Dmitry Teslenko and Tatiana Brostovich, Oleg Rodkin and Isabella Rodkina, Alexander Marin and Inna Philips, Oleg Tikholiz and Elena Tikholiz. The dancers from the club “Lileya” from Cherkassy – Anatoly Likhatsky and Alla Kolodich – also went out on the parquet floor.

In this category only two Zaporizhzhya couples from Style club were presented – Dmitry Dramshev and Ekaterina Dramsheva, as well as Peter Beletsky and Lyudmila Beletskaya. The places were distributed in this order as well. This is the tenth season in the career for Petr and Ludmila.